In the run-up to its official opening – and to celebrate the 10th anniversary of UNESCO’s recognition of the “gastronomic meal of the French” as an intangible cultural heritage of humanity – the Cité de la gastronomie Paris-Rungis is inviting you to join us at our table…in La Villette!

From September 30 to October 31, come and explore the art of the meal in all its forms, with the help of amusing and educational content devised by scientists, chefs and artists. From tableware to table manners, food appreciation and the subtleties of taste, the pleasures of French cuisine will be made accessible to all.

Take a seat for a festive meal under the benevolent gaze of some of the gastronomic heroes who’ve contributed to our gourmet heritage. Our very first exhibition will stir your senses and re-awaken buried memories! 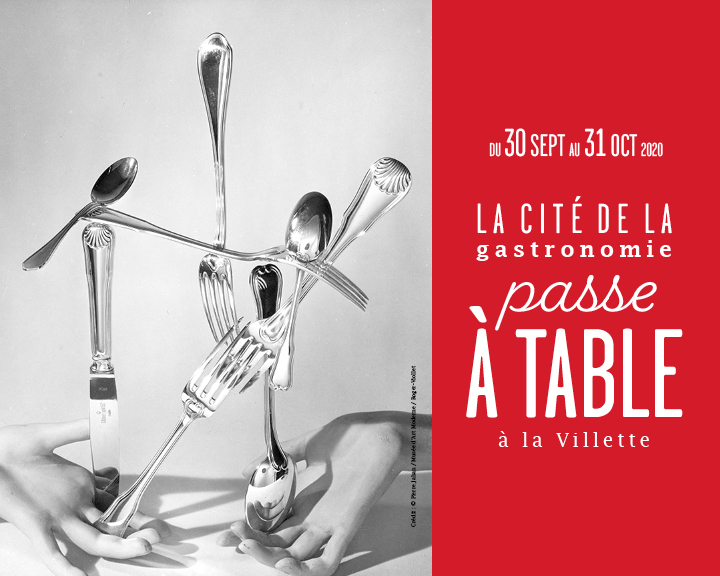 The exhibition will set the scene for others to come by exploring the festive, cultural and convivial dimension of the French gastronomic meal. With humour, frivolity and fantasy, the event will demonstrate that the gastronomic meal is a popular ritual that’s familiar to everyone in France. It’s a shared way of life that strengthens social ties – and yet is constantly evolving.

The scenography was designed by Marianne Klapisch, of the agency Klapisch-Claisse, alongside Céline Daub, an independent production designer. The exhibition’s curator is Alain Kruger, an “eclectic foodie” and film buff. A journalist and producer of the former radio show On ne parle pas la bouche pleine (“Don’t Speak With Your Mouth Full!”), he commented: “The exhibition should remind us that we all have a stake in this heritage. The gastronomic meal is a puzzle that is revealed in stages by bringing together cooks and hosts, by deciphering the codes and rites of the table.”

The exhibition is open to visitors of all ages and is built around three sections:

- Introduction: This first section explains in an educational way the differences between everyday meals, festive meals and gastronomic meals.

- The table in all its forms: On two large tables set for around thirty guests, plates continue the story via graphics, sounds and audio-visual effects. The tables are structured in five sequences to evoke every aspect of the French gastronomic meal. During their stroll visitors can explore the art of the table, customs, table manners, the art of eating well and the art of tasting.

- Gourmet memories: In a reference to Marcel Proust and his madeleine, visitors are invited to immerse themselves in the recollection of the finest dish they’ve ever tasted during a festive meal, and share with a photo the pleasure that this gourmet memory gives them.

During the exhibition the Cité de la gastronomie will present Grandmas Project: an original web series that won the patronage of UNESCO for its use of digital tools to raise awareness of intangible cultural heritage among the general public.

Each episode celebrates one of the most universal and ancestral acts there is: the passing on of a family recipe from one generation to another, from grandmothers to their grandchildren (who in this case are also directors).

Four films of eight minutes are being screened at the Pavillon Villette: Cheese Soufflé (by Chloé Ledoux); Kneidler (by Frankie Wallach); Chicken Pie (by Esther Bensedoun); and Molokheya (by Jonas Pariente). They also perfectly illustrate the wonderful cultural diversity of French cuisine

Like the Cité de la gastronomie, which forms a link between Paris and Rungis, this traveling exhibition will be presented in Paris and then in Île-de-France, notably in the Val-de-Marne department.

Open Wednesday, Saturday and Sunday from 2.30pm to 6.30pm