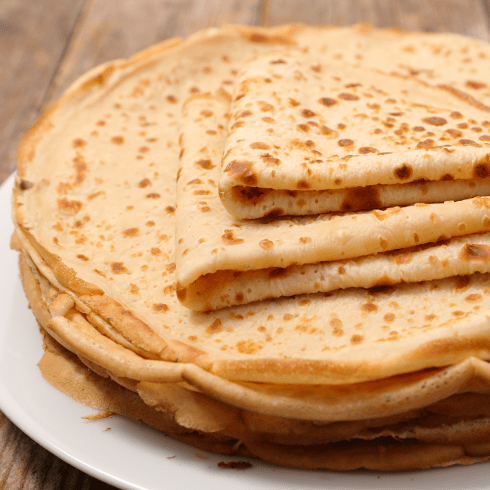 What could be simpler to make than pancake batter? Break the eggs into a pit of flour, mix with milk to dissolve them into a light paste: a recipe from childhood, when their failure was as much fun as their success. The lingering memory of one of those little pleasures that allow the joy of cooking to be passed down from generation to generation.

The shape of the pancake and the way it’s cooked on a round, flat surface are universal. Its French name, crêpe, comes from the Latin crispus, curly: it captures the modest miracle of the batter seared by the heat of the pan or the crêpe maker, the delicious noise it makes while transforming into a beautiful golden disc. It’s part of the basic gourmet repertoire of families all over the world.

What about wheat or buckwheat? Sweet or salty? When it comes to crêpes, the Bretons have laid down the law since the late Middle Ages. Buckwheat is the base of savoury crêpes. It was neither brought back from the Crusades, nor sown by order of Anne of Brittany, but cultivated in the Armorican peninsula (today’s Brittany) from the 15th century. The related galette was pan-fried on one side only, topped with eggs and sausage, or cut into strips for dipping into soup. Wheat, rarer and more expensive at the time, remained associated with desserts, so lent itself to the more refined crêpe.

Making pancake batter is a challenge in itself: beaten in the bowl, cleared of any lumps by passing it through a sieve, left to rest for a while, now it’s ready to be cooked on hot stone, in a pan, a galétoire, a billig breton, or a crêpe maker, in the hearth or on the stove...

Two requirements for successful pancakes: a hot, well-greased cooking surface. Poured with a ladle or spread with a spatula, the batter must become round and on the thin side. You just have to turn it over.

Since the dawn of time, round, golden pancakes have been associated with fortune, luck and the promise of renewal: from the Roman Lupercalia in honour of the god of fertility and cattle, to the Christian Candlemas, or candlelight festival, 40 days after Christmas, which celebrates both the presentation of Jesus at the Temple and the official return of spring. To encourage good luck and fortune, in many traditions the first pancake is flipped with the right hand while clutching a gold coin in the left. If you catch your crêpe, you win!

Every civilization in every corner of the globe makes pancakes from local grains and legumes: wheat, rye, rice, corn, chickpeas, etc. With or without gluten, most often unleavened.

The crêpe Suzette, flavoured with mandarin orange and flambéed, may have been invented in Monte Carlo by the illustrious chef Auguste Escoffier, for the Prince of Wales and his charming companion, after whom the dessert was immediately named.

You are 6 to have shared this memory!